I’m pleased to see the Black Cultural Archives in Brixton, London has some interesting shows in its calendar. One worth seeing is Rastafari In Motion.

Co-curated in partnership with the Rastafari  Regal Livity (RRL), Rastafari in Motion tells the rarely told story of the presence of Emperor Haile Selassie I and the emergence of the Rastafari movement in Britain. This exhibition introduces the mystic world of Rastafari and the guiding principles of this holistic way of life and takes a closer look at the contributions made to British society.  Celebrate the 80th anniversary of Emperor Haile Selassie I’s appearance before the League of Nations, His four-year residency in Bath and His influence on the rising consciousness of Black youth from the 1960s onwards.

Find out about the exploits of Ras Seymour Maclean ‘The Book Liberator’, and explore the movement’s expression through music, art, spirituality, education, and the rise of political agency; and their lasting legacy here in Britain.

Black Cultural Archives is the first to present Rastafari in Motion to UK audiences. First exhibited at the National Museum of Ethiopia in Addis Ababa in 2014, as part of an international collection (Rastafari: The Majesty and the Movement), this celebrated exhibition has travelled to Jamaica in April 2016, and will arrive at Black Cultural Archives this summer.

Further info is available at http://bcaheritage.org.uk 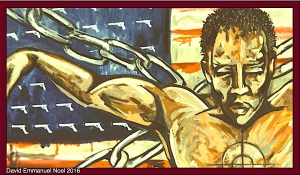 The world is reminding us of how fragile modern society is. I’m becoming frightened to switch on the TV, read the paper or catch up on tweets in case I hear of another modern day lynching of innocent African Americans, terrorist atrocities or corrupt and untrustworthy politicians fighting off party political and military coups. In previous blogs I’ve paid reference to forthcoming projects I wish to share. I’m not quite there yet but it’s timely to address some of the above issues as they feature strongly in the material I’m working on. Please watch this space and more importantly, look after yourself and each other.

“We cannot change the past, but we can change our attitude toward it. Uproot guilt and plant forgiveness. Tear out arrogance and seed humility. Exchange love for hate.”

The last couple of weeks has been very very interesting on both a political and personal front. The UK’s EU Referendum has taken place, political party leaders have either resigned, been stabbed in the back or just clinging on to power whilst the markets deal with uncertainty regarding the country’s future. As a consequence of the ‘surprise’ vote, American friends continue to air concerns regarding the outcome of the US elections and the prospect of Trump having the keys to 1600 Pennsylvania Avenue.

This is primarily an arts related blog so Ill refrain from getting on a political soap box at this moment. I will say I’m hoping to share some news on arts projects shortly. In the meantime, may I wish and yours  a happy, healthy and memorable weekend.